Some people find plants boring. However, they are very clever. How can a plant be clever? Through evolution, plants have developed many fascinating ways to survive and thrive.

The key to a plant’s success is largely in the seed dispersal technique. Without a way to disperse seeds, plants would not be able to colonise new suitable habitat and spread. Therefore plants have learnt to be ingenious in their methods of ensuring the future of generations to come.

Yesterday afternoon I was walking through my local farm when I heard a few pops coming from the vegetation beside the path. At first I thought they were the calls of a grasshopper or a cricket, but definitely not a species I had heard before. I stopped and waited to see if I could hear anymore. I did, and this time I thought they sounded like click beetles, but why would so many be clicking at the same time? I was puzzled by this strange sound until, accompanied by a pop, I saw a quick movement out of the corner of my eye. I looked closer to where the movement had come from but I couldn’t see anything that I thought could have made the sound, just a patch of vetch. Then I realised that the sound was coming from the vetch itself!

Vetches are plants related to peas, they have pods like peas although usually much smaller. The pods begin green, the same colour as the leaves, and then as they mature they turn darker until they are brown. Plants in the pea family often have pods that pop, which is advantageous to the plant as it is a great method of seed dispersal. This method ensures the seed is enough distance away from the parent plant to prevent overcrowding.

Before I witnessed the popping of the seed pods yesterday I had no idea how it actually worked. How did the pods pop? I have done a bit of research and what I found out was fascinating. On hot days like yesterday the seed pods dry out, aided by the dark colour of the mature pods in some species which absorb heat. During the drying process forces build up inside the pod until it reaches a point when the pod explodes. In most pods there are two lines of weakness running along the pod, and it is here where the tensions which are set up in the wall of the pod cause the pod to explode. Similar to when a pulled spring is let back, the two halves of the pod curl back at lightning speed which flicks the seeds out of the pod!

These two pods are still green and have not dried enough to pop.

Two seed pods which are ready to pop! They have dried in the hot weather and turned brown. 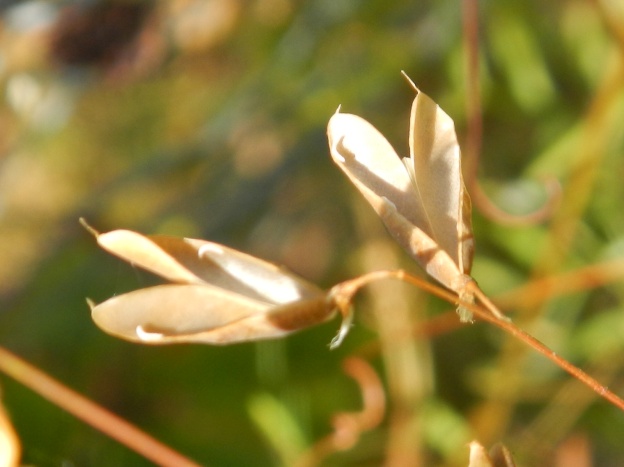