I have been checking the Sussex Ornithological Society’s website morning and evening, waiting for a rare bird to turn up (which it shall, with it being the autumn passage season) and finally one turns up not too far away from us. It was a Great White Egret, a bird that I regularly see in Africa, though have never seen in the UK before. The only problem was that the sighting appeared on a Monday, a school day, so I had to persevere a whole week of worrying whether it was still going to be there.

On Saturday morning it looked good, there was no reports of it having left on Friday (though none to suggest it was still there) and we set out just past 8 am. When we had nearly arrived I looked anxiously out of the car window to try to spot it early on, but in vain. I did get a mild shock when I misjudged the distance between me and a Lesser Black-Backed Gull, however apart from that there was no sign of it so far.

To my surprise there were only two people at the car park next to the hide, they seemed to have arrived much earlier to try to snatch a glimpse of this elegant bird. Our visit started out with a bit of horrible luck, as the Great White Egret had just flown away and rounded a bend only a few minutes before we arrived. This meant we had time to look at all of the other birds that were visible from the hide: a pair of Mandarin, Cormorants, several Green Sandpipers, a possible Common Sandpiper, Snipe, Lapwing, Mallard, Little Egret, Greylag Geese, Canada Geese and Grey Herons. While we were watching a trio of Green Sandpipers on the far bank we all received a pleasant surprise, the Great White Egret had flown silently on broad wings underneath the view of the scope! It landed half-visible to the left of the hide behind an overhanging shrub and I hastily took a few pictures. It seemed these weren’t needed, as the Great White Egret regularly flew right in front of the hide and along the far shore! Once I even took a photo of it flying behind a Kingfisher perched on a post, which I only realised when I arrived back home! 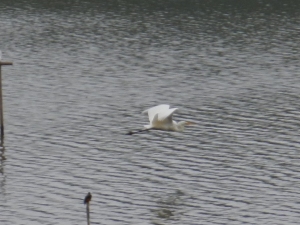 Straight after I had finished my breakfast I decided to go to Hedgecourt. This is the earliest time I’ve ever visited Hedgecourt, at 8:10 am. We didn’t see very much wildlife until water was in sight. When we arrived at the first bit of water, we saw about 30 Canada Geese fly in onto the lake but the foliage was so abundant so we did not have very good views. When we arrived at the end of the lake where we usually see all the Mallards, we could see that the water level had risen dramatically due to yesterday’s hurricane. The odd thing though, was that there were only 2 Mallards out on the water. The family of Mute Swans were there however, the cygnets are starting to look the same size as their parents! We also noticed that the Great Crested Grebes were closer to the shore than normal, possibly because we were the only people there. When we had seen all there was to see at that end of the lake, we decided to head back. When we arrived at the part of the lake where I saw the Canada Geese fly in, I decided to look at all of them through my binoculars again, just to make sure that they were all Canada Geese, not Barnacle Geese. As my binoculars were focusing on a Canada Goose on a boardwalk used by the yacht club, I spotted a fluorescent green-blue bird fly over its head. I knew it was a Kingfisher, a bird that I’ve only seen once before at Hedgecourt. It was very quick though, so I decided to carry on checking all the geese. When I was on my last goose, the aqua-marine bird flew past my binoculars again, but this time much closer. I swiftly took my binoculars off my eyes and saw the Kingfisher perched only 2 metres away on a branch sticking out from the water. In a split second it was gone, but that was enough to admire the great detail of the orange on its head.